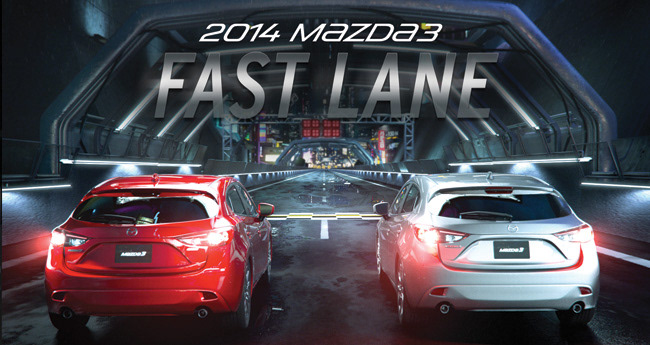 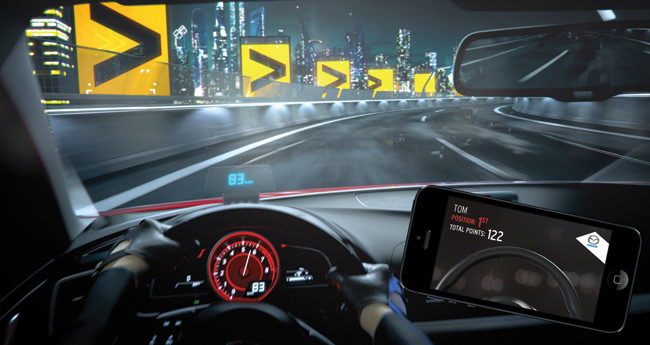 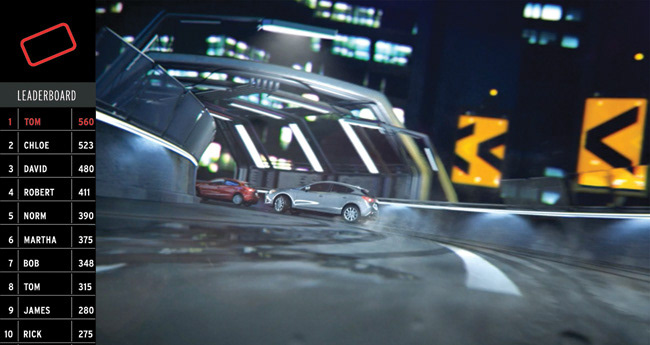 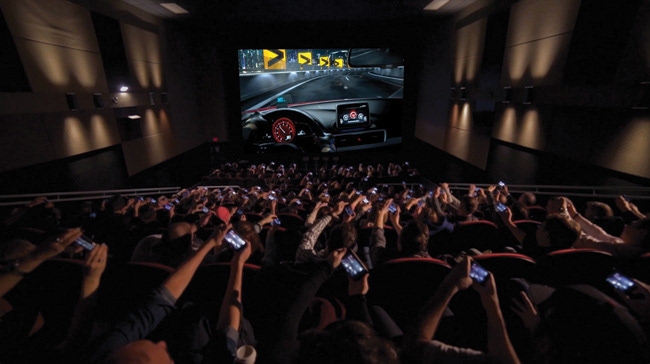 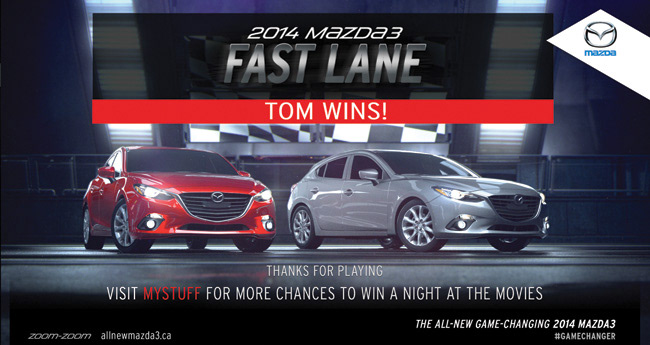 Video Director's cut from the amazing crew at iamstatic (IAS)
Mazda - Fast Lane
Launch Date:
November 1
Objective:
To launch the 2014 Mazda3, JWT partnered with Cineplex Odeon theatres and Timeplay to create the world’s first dual screen in-cinema driving game that leveraged the mobile accelerometer. The focus on branded engagement of this scale was a first for Mazda Canada, who normally focus on traditional media and activation programs to generate awareness and leads. Their social driving game turned a phone into a wheel, and every seat in the theatre into the driver’s seat for an immersive night race experience.
Insight
Those that experience the superior handling and driving performance of a Mazda are much more likely to buy. The agency’s ultimate goal was to increase real test drive requests in dealerships. For Cineplex and Timeplay, this was an opportunity to evolve their platform and bring the next level of brand engagement into cinemas. The development of a mobile controller, yet untested, needed a brand to champion the project, and Mazda jumped into the gap. They delivered a controller that measured the performance of each player every 200 milliseconds. This allowed for continual scoring and feedback throughout the game. From a content perspective, our challenge was to create an immersive gaming experience for a mass audience. The answer was to create a single big screen visual experience that a mass audience could affect, yet still have independent feedback to increase competition and engagement on each mobile device.
The agency partnered with Topix and IAMSTATIC to develop video sequences of racing footage from both the lead and chase car in a first person perspective, and cutaway footage of the cars in third person perspective at intervals throughout the race. Depending on how the crowd performed, we showed them falling behind or taking the lead in the cutaway portions of the race.
The soundtrack was an integral portion of the big screen experience. I partnered with Drastic Music + Technology to record every sound of the 2014 Mazda3 from the engine to the indicator clicks, even doors and windows closing to incorporate into the fast paced track and sound effects, building on the sound design of the wet road and tunnel environments.
Players were tracked on the big screen and via their mobile devices, and received bonus points for matching the ‘perfect line’ of our hero driver, or vibration feedback to help correct the steering of those who strayed off course. After the race, the Time play app pushed an offer to sign up for a test drive after the race. Their immersive branded experience with a gamification layer played a huge role in the success of the project.
Results:
Winner activation rates were 50%, the highest achieved by any Timeplay experience.
8,809 requests for test drives
266% increase in social conversations. 10x higher than previous innovation initiatives.
933 Facebook shares/likes, highest engagement achieved by any Timeplay experience.
Over a quarter million online impressions (266,000) generated over one month.

What is it?
“Mazda Fast Lane” was the world’s first multi-cinema driving simulation game. The mobile experience utilized smartphones’ accelerometers and the Cineplex TimePlay app, which let audiences play interactive games in the pre-film segment.

What did we create?
I was the Creative Technologist & Senior Digital Producer on the project. Working as a partner to the group Creative Director, I took a challenging media opportunity on the old Cineplex "Timplay" platform and improved it considerably. Typically, this platform has a trivia-style button clicking game. I helped the originator rewrite the platform to include some new bells and whistles. We created something extraordinary. I also sourced three external "best in class" motion houses to submit treatments, I held court with the CD and Account Director and we elected to work with the fantastic team at IAMSTATIC, allowing them to create the visually stunning graphics.

What was the outcome?
In “Fast Lane”, movie-goers competed against each other and a real-time leaderboard tracks their progress on screen. Participants could win concession products just for playing and those who win are entered into a draw for a free movie night. Participants are also able to request a test drive directly from the app, which sends their contact information to Mazda dealers who follow up. The game garnered the highest activation rate (27% overall) of any Cineplex in-cinema experience to date, increasing social conversation by 266%.

It also translated into 8,809 test drive requests—so many, that we overwhelmed the Mazda dealer network with requests.
A good result for any automotive client.

Put yourself behind the wheel of the all-new 2014 Mazda3 with Mazda Canada's Fast Lane, a Cineplex TimePlay Interactive Film! Using this interactive app, you could control the big screen, win the race, and experience the thrill of driving the all-new, game-changing 2014 Mazda3 without leaving the comfort of your seat. Then head to your local dealer to test drive the real thing.
CREDITS:
Client: Mazda Canada
Brand: Mazda3
Agency: JWT Toronto